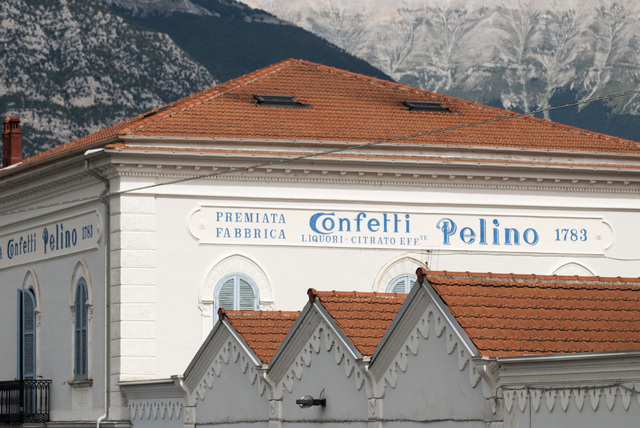 The museum consists of three exhibition rooms on two floors. In the first section the displays include the Pelino family tree, mementos and valuable objects, among which are the ancient patents of the Pelino factory, diplomas and honours and an important and valuable collection of wedding favours from the 19th and 20th centuries plus some artistic confectionery creations.

In the second room there are some precious artefacts relating to the history of the factory, confetti which belonged to famous people with a collection of their personal quotations and comments about the confetti of Sulmona, and a loom which was used to prepare the beaded strings of candy.

The last room is a reconstructed workshop from the 18th century, with machinery used for the production and processing of confetti such as copper basins and tools including a toaster, a threader, a peeling machine, a polishing machine, some mills, mortars and strainers for the various sugar syrups.  There are also several glass vases containing the ancient ingredients that made up either the centre or the candy coating.
The museum also documents the introduction of technological innovations in energy resulting from the transition first to steam and then to electricity.  These include the first hot air convector and company electric motor which shortened the processing time.


Founded in 1988 and recognised as a national monument by the Ministry of Culture and Environment in 1992, the museum is unique among factory museums. It is housed on two floors of the beautiful Art Nouveau building of the Mario Pelino confetti sweet factory which is one of the oldest and most prestigious in Sulmona. It illustrates and summarises the history of the production of confectionery in the town of Sulmona through interesting and rare historical artefacts on display in the three exhibition rooms. There are tools for administrative management, old machinery and equipment, plus a large collection of wedding favours, citations, diplomas and awards. It is a tribute to the master confectioners who pioneered, from the late Middle Ages onwards, the master craft which made Sulmona famous worldwide. There is also an evocative reconstruction of an 18th century workshop with tools and equipment of the era.